Doug converts his TV-76 telescope into a "super telephoto" by placing a Tele Vue 4x Powermate amplifier into the focuser. He then attaches a Canon 10D Digital SLR by way of 4x Powermate T-Ring Adapter and Canon EOS T-Ring. This setup transforms the TV-76 into a 1920mm lens! 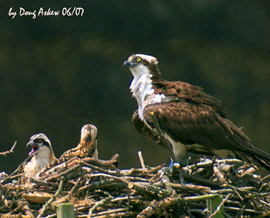 Jerry employs the Tele Vue-76 with various digital cameras (Nikon Coolpix 995 or 4500 and Olympus C-7070WZ) using the digiscoping technique. The camera's optical zoom is used to frame the image. Jerry praises the apochromatic quality of the TV-76: "It takes an apochromatic scope to achieve the best color correction in digital pictures, ... ." He also compliments the light weight of the TV-76 in the field. "I have received requests from the US Fish and Wildlife Service in Virginia and from a Land Trust conservancy project in Michigan, asking to use copies of my photos seen at your website. They are using them for interpretive purposes for the public. I felt honored. Thanks for the opportunity to have people see these photos and put them to such good use." 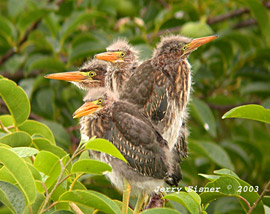 Congrats to Jerry Eisner for taking one of the Top-3 Best Digiscoped bird images ever! The laurels were bestowed by Living Bird magazine in their Autumn 2007 issue. This image of baby Green Herons employed the combination of TV-76 with TV 32mm Plössl eyepiece and Nikon Coolpix 995 camera.

See more Jerry's images in the Image Gallery below