Astronomy magazine turned 40-years-old in 2013. In celebration of this anniversary, the August 2013 issue featured notable events in amateur astronomy over the past four decades.

We are pleased that they featured two of Tele Vue's keynote products: the original 13-mm Nagler 82° eyepiece, from 1980, and equally groundbreaking 13-mm Ethos 100°, eyepiece from 2007. Astronomy senior editor Michael Bakich writes that "we live in our hobby's golden age".

Tele Vue is proud to have been a part of it. We congratulate Astronomy for their contributions to amateur astronomy and wish them continued success in the years to come.

Images and text from Astronomy are copyright of Kalmbach Publishing Co. 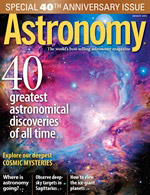 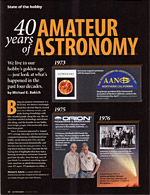 2007: 13mm-Ethos
"Tele Vue introduces the 13mm Ethos, an eyepiece with a 100° apparent field of view."
Astronomy Magazine 2013 Update:
4.5mm Delos Makes Astronomy's "Star Product" List for 2013
The list in the September 2013 issue featured the "best of the best" in terms of "innovative designs, technological breakthroughs, and great values", compliled by the magazine editors.

2013 "Star Products List": 4.5mm-Delos
"Once again, Tele Vue joins our list with a new addition to its outstanding Delos line of eyepieces. This 4.5mm focal length features a 1¼" barrel, a 72° apparent field of view, a comfortable 20mm of eye relief, and unparalleled sharpness. What results is a breathtaking high-powered view unequaled except through another Tele Vue eyepiece. "
Product List