Concept: At Tele Vue, the driving force has been to get as close to the contrast, resolution and field of the most remarkable instrument of all: the human eye. While always respecting the need for viewing comfort, convenience and value, we have broken through conventional barriers to bring you eyepieces and telescopes with performance dramatically closer to our "spacewalk viewing" goal. A major limitation has been the lack of binocular viewing. The night sky with one eye closed is missing a lot. Open both eyes and see the dramatic improvement in resolution, contrast, and viewing comfort. All this plus an illusion of depth. Yes, your brain loves two eyed viewing, even when it's not true stereo. Open your eyes and mind to Bino Vue. — Al Nagler

You're probably aware that the color correction and resolution of all high powered binoculars is far less than ideal. Usually the size, weight, cost, inconvenience and lack of interchangeable eyepieces render them undesirable for all but the most die hard fans. 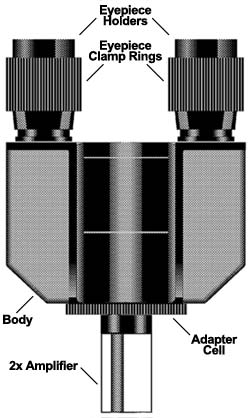 We immediately recognized the advantages of a binocular attachment that adjusts interpupillary distance like an ordinary binocular and sets up as easily as changing an eyepiece. The in-line viewing arrangement allows inter-ocular adjustment without focus shift. And, we use the largest prism apertures possible.

To permit Bino Vue to reach focus with any telescope, we engineered an optical elimination of its 5.1" path length. Our special compensator lens system makes the Bino Vue parfocal when fully inserted to its stop and, results in only a 2x increase in magnification. The compensator lens also corrects for prism effects that can degrade high power viewing.

For short focal length scopes such as the Tele Vue-76, Tele Vue-85 and Tele Vue-NP101is, the 2x amplification results in low powers down in the 30x range. Even larger instruments will find the Bino Vue extremely versatile. For example, a 13.5" f/4.5 Dobsonian, would have a low power limit of 96x with a pair of 32mm Plössls.

Finally, Tele Vue tests the collimation and image quality of each unit. This time and labor intensive operation is essential for a binocular viewer used at planetary magnifications. Tele Vue has the facility and expertise to service the Bino Vue should it be required. You always have that assurance with Tele Vue.