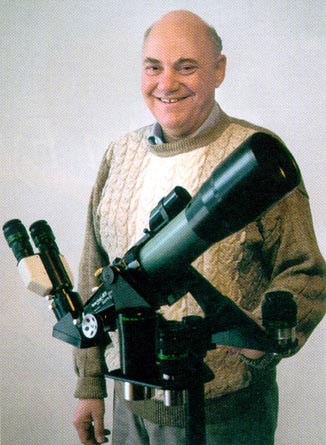 "HEY! FEAST YOUR EYES ON THE VIEW through this Nagler eyepiece!" That was the call I heard one night at the Stellafane convention's telescope field in the early 1980s. I had used many types of eyepieces for my observing - from wide-field Kellners and Erfles to Plossls and Orthoscopics. But when I first looked through Al Nagler's 13-millimeter eyepiece that summer, it was as though I had opened a big door to the universe and walked right through the telescope.

Although several manufacturers now offer high-end eyepieces with prices that would have been unhead of in the old days, Nagler started it all. His pioneering optical designs have shown us a whole new way of looking at the sky. This revolution got its start in 1946, when an 11-year-old Nagler walked through the beautiful blue doors of New York's Hayden Planetarium and immediately fell in love with astronomy. He already had an eye on the stars with a set of Roy Rogers 3-power binoculars. By the time he entered high school, the youngster had a small refractor and, later on, a 3 1/2-inch f/11 Skyscope. With these simple, modest instruments, Nagler began his remarkable career as a master optician and devoted amateur astronomer.

During his junior year at the Bronx High School of Science in the early 1950's, Nagler's interest was motivated by a shop teacher named Charles Cafarella, who taught a course called Science Techniques Laboratory. For Nagler, the school shop was as magical a place as Hayden had been years earlier. "You were allowed to do your own project," he recalls. No wooden tie rack for him; instead his choice for his shop project was a 300pound, 8-inch f/6.5 Newtonian reflector. It featured a hexagonal plywood tube, a German equatorial head made from pipe fittings, and an oak tripod. Nagler ground and polished the scope's primary mirror on the only flat surface he could find - his mother's wooden sewing machine tabletop and absolutely ruined its surface, he admits, "but Mother was pretty tolerant about it."

At 18 Nagler bought his first car - a retired Checker taxicab. It was the only vehicle roomy enough to carry him, some friends, and his new telescope to his observing site in Mount Kisco. On one trip a police officer stopped him to inquire if he was illegally carrying a coffin in the back of his car!

Nagler graduated from high school in 1953 with an ambition to be a machinist. But his 8-inch scope steered him to greater glory. Its construction became the subject of Nagler's first article published in the December 1955 issue of Mechanix Illustrated. The telescope was also featured in Sky & Telescope in October 1957 and won third prize for mechanical excellence at Stellafane the following year. Nagler also contacted S&T's former Gleanings for ATMs editor Earle B. Brown, who was then chief project engineer for Farrand Optical Company. Nagler joined that firm in 1957 and a year later, on the basis of his article in Mechanix Illustrated, was promoted to Farrand's optical design department, where he learned more about optics, mechanical calculators, and early computers. While there he designed the original eyepieces for the U.S. Army's first night-vision goggles.

In the 1960s Nagler designed the optics for visual simulators used to train astronauts in piloting the Gemini spacecraft and the Apollo Lunar Module. The Lunar Module simulator's design called for a giant "eyepiece" that virtually swallowed the entire lander - it used a mirror 8 feet wide and a lens 3 feet in diameter to project real-time views of a 36-inch TV screen and celestial sphere through the lander's windows. The system allowed the trainees in the lander to see the images as if they were at infinity.

The screen was hooked up to a TV camera that "flew" down on to a scale model of the Moon's surface. The sphere, on the other hand, had 1,000 shiny ball bearings on its surface that were illuminated by an external light source to imitate the background star fields. Each bearing was sized and arranged to match a real star's magnitude and location in the sky. ("As an amateur astronomer, I had some bearngs gold-plated to make the red stars appear realistic," Nagler revealed.) The resulting star fields were so accurate that astronauts no longer needed to train inside a planetarium. According to Nagler the simulated views through the windows were equivalent to using an "eyepiece" with a 110° apparent field, 36-inch eye relief, and a 12-inch exit pupil. Now that's a Nagler eyepiece!

By the time of the first lunar landings, Nagler had earned a degree in physics from the City College of New York. In 1973 he left Farrand to become chief optical engineer for Keystone Camera Company, a firm specializing in the 110-format pocket cameras that were popular at the time. His new job marked a major change - instead of designing multimillion-dollar optical systems, he now had to worry about the consequences of using an inexpensive plastic lens or a glass one!

A Company Is Born

In 1977 Nagler finally decided to follow his childhood dream. He founded Tele Vue Optics in Spring Valley, New York, and three years later, began catering to the amateur astronomical community by designing and marketing a new series of Plossl eyepieces. As his company grew, Nagler never forgot the fabulous Lunar Module simulator optics he had made. Would it be possible to design an eyepiece with an ultrawide field and very long eye relief?

In 1982 Nagler took a big risk when he introduced the $200 eyepiece series that bears his name. (At that time most eyepieces sold for under $50.) The gamble paid off, and he continued with his 9-mm and 4.8-mm versions. "After that, I decided to tackle the wide-fields, up to 40-mm," he says. "Then I tried to make obsolete the things I had done before!" In 1987 Tele Vue proudly introduced its first 20-mm Nagler Type 2 series. This ocular is an engineering marvel. Weighing 2.3 pounds, it is so heavy that it usually requires rebalancing the telescope it sits on. The effort is certainly worth it since you don't look through a Nagler 20-mm, you walk through it to the heavens.

Tele Vue's product line also includes refractors. "There's no trick to getting good images at f/15," Nagler notes. "But doing it at f/4 is a different story." And so in 1981 he developed the first of Tele Vue's telescopes, a 5-inch f/4 refractor with a built-in iris; he called it the Multi-Purpose Telescope or MPT. Nagler still uses the MPT to test his eyepieces. It sired a whole line of telescopes, from the Renaissance to the Tele Vue 101. These instruments complement Tele Vue's expertise in eyepieces.

Tele Vue is very much a family business. Nagler and his wife, Judi, have known each other since their first date in the late 1950's - a visit to the planetarium followed by a concert. Married in 1961, the Naglers have a son, David, and daughter, Meryl. Judi is a "prime mover" at Tele Vue, running the office and making sure everything goes smoothly. David has been with Tele Vue for the past 11 years and is involved in all aspects of the company's operation, from telescope manufacturing and testing to creating advertisements.

"Astronomy is the most wonderful pursuit," Nagler says. "If we had more amateur astronomers in the world, we'd solve a lot of fundamental problems. The more people who enjoy and understand our place in the universe, the better our own planet will be. And if I am a Pied Piper in this regard, that's what I want to be."