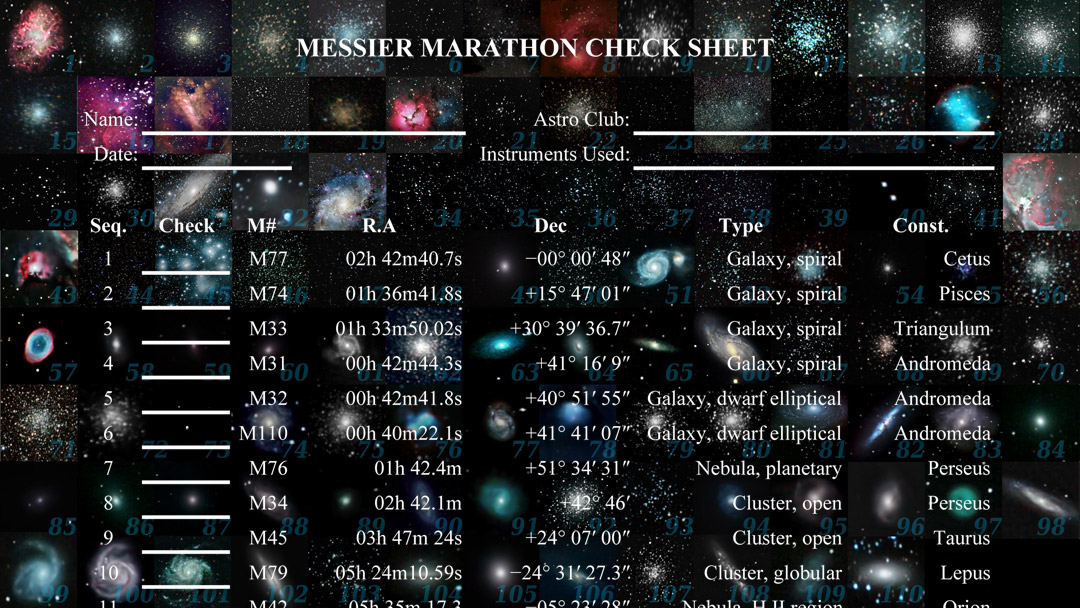 Beginning amateur astronomers soon encounter the term “Messier objects.” They learn that this is a list of objects outside our Solar System that are visible through small telescopes. This list was originally compiled by Charles Messier, in the 18th century, from his observations and those of contributors. The catalog has been updated over time, as recently as the mid-20th century, to 110 objects in total.

Due to low-quality optics in the early centuries of telescope aided astronomy, many faint objects that  we wouldn’t confuse with comets today, appeared sufficiently “smudgy” to be mistaken for such. Messier’s goal was to help comet hunters avoid “discovering” these known objects. However, his list is valued in modern times as a collection of “showpiece” objects, visible through small telescopes from northern latitudes. This is true due to the small instruments and northern hemisphere locations of the observers that contributed to the list.

A quirk of the list, when ordered by celestial coordinates in Right Ascension (RA, see diagram right), is that only one Messier object is found between RA 21:40 and 0:40. That lone object, open cluster M52 in Cassiopeia, never sets when viewed north of Florida.

Northern latitude amateurs noticed that, around the dates of Vernal Equinox (Spring) in late March, the Sun it located right in the aforementioned “Messier gap.” This means all 110 Messier objects are on “either side” or “north” of the Sun and available for observation throughout the night — if an observer worked fast enough. Hence, the phrase “Messier Marathon” was invented to describe the all-night attempt. Traditionally the Messier Marathon is done without a “goto” scope, as an automated scope would make the task too easy.

The best date to run the Marathon depends a bit on your northern latitude and a lot on the Moon. In the northern tropics, there was a window of opportunity Saturday night into Sunday morning, after the March 6th New Moon, to see all 110 Messier objects. For mid-northern latitudes the observing window is much different. This year, the Equinox is March 20th and the March 21st Supermoon bathes the night sky in light. (This will be the last Supermoon of the year after having one every month this year). So, we must wait until further into the month to start hunting for “faint fuzzies” in the evening sky.  The smart money says that March 30/31, 2019, which happens to be Saturday night/Sunday morning, will be the best time to try see all the Messier objects.  That evening, the crescent Moon will set before the Sun and rise right before astronomical twilight in the morning .

Our small APO doublet refractors (Tele Vue-60, -76, and -85) offer a combination of versatility, performance, portability, and build quality unique in the market. They have large visual fields at low-power to help locate “faint fuzzies” without need for an additional finder scope  — just what you need to complete a Messier Marathon. Mounted on our Tele-Pod or  Panoramic mounts, they are excellent for transportation to dark sites for casual or Marathon viewing of all the Messier objects.

By 2001, the Tele Vue-NP101 (Nagler-Petzval) scope was the ultimate culmination of 30-years of refinement toward optical perfection. A review in the Backyard Astronomer’s Guide said: “optics don’t get any better than this.” But we did not rest on our laurels: with the CCD imaging revolution challenging telescope optics beyond anything ever placed at the focal plane, we were determined to make the NP101is and NP127is scopes optically, mechanically, and functionally as perfect as possible for imaging on chips with up to 50-mm diagonal without penalty to near ideal visual operation. The maximum visual fields on these scopes is very impressive. These bigger scopes work well with our rock-solid Gibraltar HD4 or HD5 mounts with built-in piers for viewing objects at the zenith.

Our telescope objectives are our own proprietary apochromatic designs producing startlingly natural images. Their short focal lengths provide wide fields-of-views to observe some spectacularly large deep-sky objects such as the North American nebula, all three sections of the Veil Nebula, the full extent of the Andromeda Galaxy, the Double Cluster, etc.

From the powder-coated tubes and anodized aluminum finishes to the silky-smooth, lash-free focusing, these scopes are rugged and easily transported to dark-sky locations. Tele Vue telescopes are engineered and built to be your life-long observing companions; and someday, your kids’ as well.