Let’s start out by stating that the Mars 2020 opposition will be the “best” one this decade for mid- and high-northern hemisphere observers. (Better even than all the ones in the 2010s!) On opposition night, 13 October 2020, the “Red Planet” will be brilliant in the sky at magnitude -2.6 and 22.4″ in diameter at a Declination of 5.5° above the Celestial Equator. It will reach 44° in elevation above the horizon in the city of London, UK.

Follow-on oppositions for the rest of the decade will have Mars cruising high over northern skies. It’ll be 63° above the horizon for observers in London in 2022 and 2025. It’ll then settle down slightly to 54° and 40° above the horizon for 2027 and 2029.  The problem though, is one of size due to the varying distance between our planet and Mars (see diagram right).

At opposition in 2022, Mars will be a dismal 17” orange ball. Opportunities don’t improve going forward: for the 2025 opposition, it will only be 14” in diameter and stay that size for the 2027 and 2029 oppositions. There is no good news at the start of the next decade. While there will be an upswing in apparent diameter back to 17″ in 2031 however, the planet will again be low in the northern sky at -15.3° Declination. You’ll have to wait until 2033 to see Mars approach this year’s 22″ in diameter. However, at a Declination of -27.8° — great for tropical and southern hemisphere observers — it will just peak at about 11° over the horizon for observers in London.

Mars has recurring oppositions with Earth every 26 months. So, there are only a few chances to witness one each decade. This year’s Mars opposition is “the last good one” for many northerners unwilling to travel south to more advantageous observing sites.

Our Tele Vue Nagler 3-6-mm Planetary Zoom (mobile site) is excellent for teasing out the fullest possible observing detail on Mars in short to medium focal length scopes. Being able to tune the highest usable power for your prevailing atmospheric conditions allows you the best chance to see the surface features on the Red Planet such as: the peaks of the Tharsis volcanoes, the Syrtis Major and Utopia Planitia albedo features, and the ever-changing polar caps. As a Planetary Zoom eyepiece it was designed for full-field sharpness for any speed telescope, high contrast and transmission for natural color rendition, low scatter, and comfortable eye-relief. It is parfocal through the zoom range and has both a constant 10mm of eye-relief and 50° apparent field of view. No need to keep swapping eyepieces to find the highest usable power and missing those fleeting moments of steady air!

For observing the planet in undriven scopes, we highly recommend wide apparent field of view eyepieces such as Nagler (mobile site) and Ethos (mobile site) due to the larger true fields per magnification they deliver over narrower field eyepieces.  Their extreme field sharpness allows you to place the planet at one edge of the field and let it drift across to the other before having to reposition your scope!

If you’re more comfortable with long eye-relief while lingering at the eyepiece for that moment of steady seeing, consider our 72° Delos or 62° DeLite eyepiece series with their 20 mm of eye-relief. In addition to producing razor-sharp images in even the fastest telescopes, both series feature adjustable height and locking eye-guards to keep surrounding light from degrading the naturally high contrast these eyepiece produce.  With a wide range of focal lengths, you’re sure to find the right planetary magnification for your scope.

I like to follow the evolution of Mars when the Mars Opposition is underway. The eyepieces I use are mainly classical Tele Vue eyepiece such as a 10mm Delos, a 3-to-6mm Nagler zoom and when the atmosphere cooperates a 2.5 mm Nagler — this to reach a magnification of 1,000x.

To make a sketch, I only draw with black pencils on white paper.  Because I use a red light, using colors while at the eyepiece is impossible.  For my color memory, I write with care the color names that I detect on the planet. I use a lot of rich nuances of color combinations such as 75% ocher plus 25% of light yellow, or 66% light pink plus 34% light carmine, etc. …  Then, at the workshop, I add those colors to the shape of the planet.

We profiled Michel Deconinck’s eyepiece usage and sketches on our blog post: Return to the Moon with Michel Deconinck. He and his wife Jannik run a  ‘Bed and Telescope’ to share the night sky with visitors. See his Bed and Breakfast, Observatory, and Artist Workshop page. 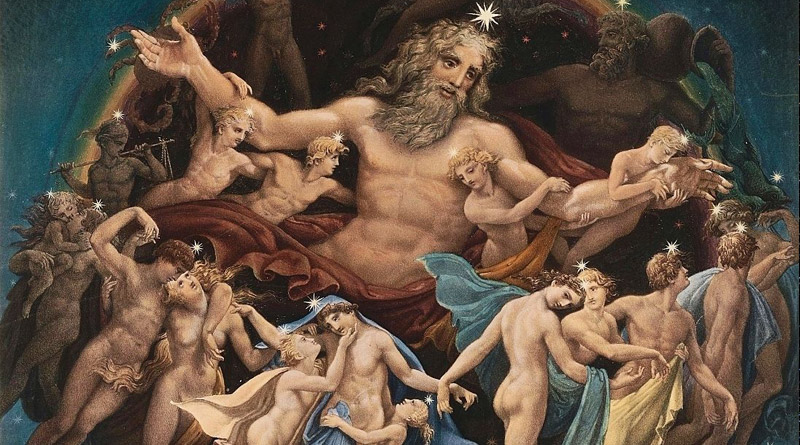