Since the 1990s, a Red-tailed Hawk known as "Pale Male" has captivated bird watchers in New York City. He is famous for setting up a nesting site on the ornate stonework of an exclusive, celebrity-filled, Fith Avenue cooperative appartment building across from Central Park.

By the mid-2000s, the constant vigil of bird watchers, that setup telescopes to watch the activity of Pale Male and his various mates from across the street, was too intrusive for many of the famous and well-heeled appartment owners. (Stories in the media at that time claimed that the building board had turned down Barbara Streisand's request to buy an appartment because of the attention it would attract.) The building management tried to address the "hawk problem", in 2004, by removing the nest — resulting in a media firestorm. Within a few weeks, Pale Male and his mate were allowed to return to the building. He is still a fixture in New York citi's urban birding scene.

In its hayday, the "Central Park Hawk Saga" was fodder for New York City media and spawned a best selling book. The activities of Pale Male and his mate Lola were tabloid news. Think of the following as Tele Vue's "scrapbook" of recollections from that period, featuring visits to the nesting site by Al Nagler, Tele Vue, CEO. 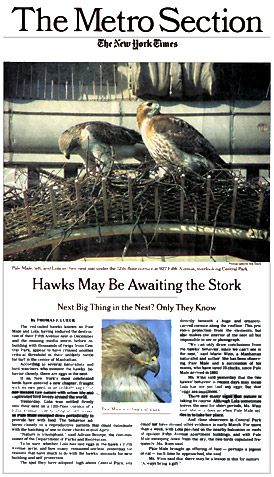 "We can only draw conclusions from the hawks' behavior, since we can't see in the nest," said Marie Winn, a Manhattan naturalist and author. She has been observing Pale Male and a succession of his mates, who have sired 23 chicks, since Pale Male arrived in 1993.

Pale Male brought an offering of food — perhaps a pigeon or rat — each time he approached, she said.

Ms. Winn said that there may be a lesson in this for suitors: "Always bring a gift."

We're excited to watch the Hawk Saga continue. Check it out if you visit Central Park. (We had spectacular views of Pale Male and Lola on Saturday March 19, 2005 through the Tele Vue-60 at 103x). Rik Davis, the photographer, is often on hand with his Genesis SDF to show and photograph the action. In fact, his photo taken with the Genesis-SDF, 13mm Nagler Type 6 and Nikon 995 proudly graced the NY Times Metro front page on Tuesday, March 15.

Above and below are some excerpts from the article and the photo used by the Times, courtesy of Rik. 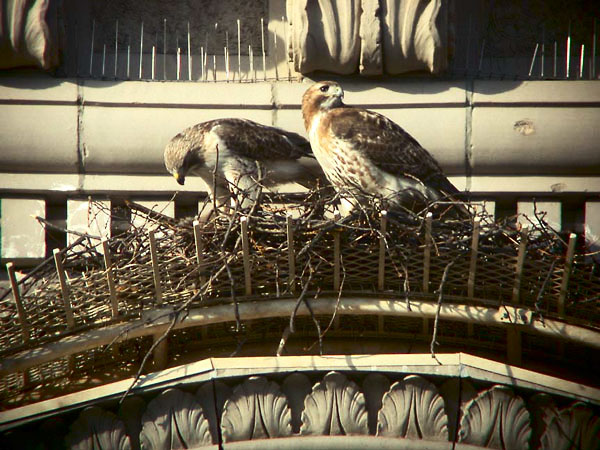 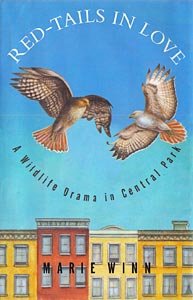 In January 2005, I visited the boat pond in Central Park to see the new nest support replacement for the evicted Red-Tail hawks. I had great views of not only the nest architecture but the female Red Tail "Lola" perched on a window-ledge on 5th avenue. Lots of fun with the Tele Vue 60 and 3.5mm Nagler at 103x for scores of passersby, plus old friends like photographer Rik Davis.

As a natural follow on, I picked up the book Red-Tails in Love by Marie Winn -- loved it and highly recommend it. An updated edition in April 2005, with an added chapter "Ten years later" will cover the recent drama of eviction and restoration of the nest site, and updates on the sightings and the appendices according to Marie, who I contacted.

You might enjoy the following excerpt from her book, of her visit to an apartment across Central Park in hopes of seeing whether the eggs had hatched.

I had not given up hope entirely when I paid a visit to Stanley Diamond, a lawyer who lives on the eleventh floor of a building on Central Park West and 74th Street – directly across the park from the hawk building. Though his apartment was considerably farther from the red-tail nest than the hawk bench was, he had managed to bridge the gap – and then some – by means of technology: in his living room window stood an astronomical telescope pointing directly into the hawk nest. While our strongest spotting scopes magnified sixty times, his instrument was more than four times as powerful as that. I cadged an invitation to pay him a visit – I knew a friend of a friend of a colleague of his wife's. A look through his telescope might end our speculation once and for all. Maybe I would see chicks at last, or at least eggs.

It was a fabulous apartment, but as soon as I walked into the living room and saw the telescope in the window, I headed for it like a horse with blinders. I dutifully wrote down its name, for I knew the birdwatchers, ever interested in optics, would ask. It was a TeleVue Optics telescope with a Nagler lens and a 2.5 doubler. I stood on tiptoe without waiting to have the tripod adjusted to my height, too eager to take the look I had been anticipating so keenly

The image was oddly dreamlike – everything was floating as if it were on water. At first I didn't recognize the hawk. From the hawk bench, I was used to seeing just the top of the head of the bird in the nest; now almost the entire bird was visible. It was Pale Male, though it took me a while to be sure. He looked so different at that magnification – so much more, well, personal. The markings around his beak gave his face an expression as if it were a human face. He looked proud, somewhat disdainful. That was my impression as I gazed through the telescope at him.

From the hawk bench, the bird in the nest looked motionless. Now I could see Pale Male's head making constant little movements – he was watchful, alert. I could see his eye clearly, and a startling illusion made it seem as if he were looking directly at me. Alas, I could see immediately that even if the bird flew off, the inside of the nest would not be visible. The angle was wrong. The window was not quite high enough to look down into the nest.

The only piece of substantially new information I picked up on my expedition across town was about Stanley Diamond's next-door neighbor there on the eleventh floor. It was Mia Farrow, Woody Allen's ex. Her apartment also looked out at the hawks' nest – and at Woody's building too, come to think of it. I wondered if she had a telescope in her window.

Attributed images are Copyright © of photographer and used by permission.