Original models of the Starbeam did not include the flip-mirror. Flip-mirror can be ordered as an accessory to upgrade these older models.

Current Starbeams have red dot illuminators that can be set to steady-on or blinking at various rates. These illuminators fit all prior model Starbeams and can be ordered direct from Tele Vue. 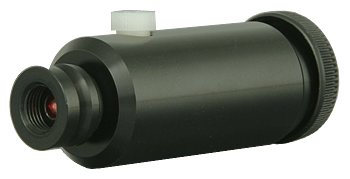 Later model fixed Tele Vue base (SFT-2003) Starbeams can be converted to the current Tele Vue Quick-Release base model by attaching a Dovetail base (QRD-1006) to the Starbeam base channel (with 10-32 x 3/8" button head screws) and mounting a Quick Release Bracket (QRB-1002) to the slot on the Tele Vue mount ring. To determine if your SFT-2003 Starbeam can be converted, remove the Starbeam body from the Base Chanel by loosening the Horizontal Adjustment Screws and removing the Vertical Lock screw. In the Base Channel, convertible models have two through holes located on either side of the threaded Vertical Lock Screw. At least one hole will be occupied by a button head screw. You will need screws in both holes to secure the Base Channel properly to the Dovetail base (QRD-1006). 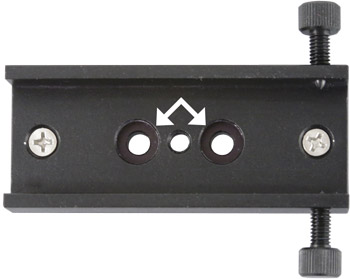 Late model Starbeam base channel showing through holes on either side of the Vertical Lock screw thread.