Skip to content
Classic History Restore / Repair
December 27, 2018May 3, 2022 TVO Staff 2018, Brass, Cleaning, Optics, Renaissance, Restore
Restoring a Storied Scope
A customer recently called because his vintage Tele Vue Renaissance telescope needed some tender-loving care.  The Renaissance was our second model, put on the market after the 1981 “Multi-Purpose Telescope” (MPT). The customer’s scope was built in 1985 and is from the initial production design with a bolt-on focuser.  After discussing the obvious issues that needed addressing and our evaluation process, he decided it would be worth it to him for us to have a look at the scope.
When we received the scope, the most obvious troubling issue was the focuser.  It was unusable. The pinion shaft was badly bent and two of the three teflon runners supporting the draw-tube along its travel were missing.  The outer surface of the objective showed years of grime, and all of the brass components were heavily oxidized. The optics, however, were only slightly mis-aligned, producing a mildly flaired star shape at high power, but the image was still serviceable for terrestrial and deep sky  viewing.  Sadly, after a complete optical and mechanical inspection, we concluded that it just wasn’t worth the effort and expense to revive the telescope.  That, however, was not our customer’s conclusion.
He gave us the go-ahead and we proceeded to give his 1985, brass Tele Vue Renaissance a new lease on life. A “renaissance” for this Renaissance if you will!

Having made our “to do” list, the greatest effort would be in trying to carefully straighten the pinion shaft to make it serviceable again, followed by recreating the missing teflon runners to actually allow the drawtube to run true in the focuser body. If we only had the parts, this would be a lot easier and less expensive.

While searching through boxes in our “bone-yard” for a different repair job, our lead telescope tech Tom discovered a box labeled “Renaissance.” Opening the treasure chest he found an old focuser body and some other parts, but at the bottom he found the “needle in the haystack.” There at the bottom was a complete bolt-on style focuser for the original Renaissance!  Tom quickly proceeded with completely tearing down the scope (including the N.O.S. focuser) for a thorough cleaning and refurbishment of the metalwork.

36-man hours later the Renaissance was back together.  With its freshly cleaned and aligned optics it was ready to head back to its happy owner for its “first light” in quite some time.
Is it worth restoring an older Tele Vue refractor like this Renaissance?  This owner certainly thought so. After all, the Renaissance is a Nagler-Petzval lens design with 4-elements in 2-groups like our current-model NP101is. Though the current scope is leaps and bounds beyond the Renaissance in optical performance and mechanical capability; put in the context of the mid-80s there was no refractor close to the combination of beauty, rich-field capability, color correction at f/5.5, flat-field, and diffraction limited performance of the original Renaissance.
Over the years we’ve heard a countless number of great memories being made with Tele Vue telescopes. In those stories are the occasional “oops” moments. We are happy to be here to help erase those moments and get you back to making new great memories. Since all Tele Vue telescopes were/are built in-house, we have your scope’s specifications on hand. We still have a fair stock of spare parts — some new and some used — plus the know-how to restore your vintage Tele Vue scope. Call us if you need us at 1-845-469-4551 from 9:00 am to 5:00 pm EST.
Tele Vue Tip: Clean Optics The Right Way!
You might not own a Tele Vue Renaissance, but every scope requires the same type of care. The above image is why we don’t recommend the use of “canned air” products to blow dust off optical surfaces, such as those on mirror diagonals, eyepieces, and telescope lenses. Especially if the can is shaken or used at an angle, droplets of refrigerant-based propellant can emerge from the nozzle and instantly freeze on the optical surface on contact (due to the low boiling point of the refrigerant). The freezing causes stress on the glass that can lead to shattering as shown above.
See our  Tele Vue page on Optics Cleaning on our website (mobile version).
For advice on maintaining a brass Renaissance and matching Gibraltar mount, please see our companion blog post:
Tele Vue Scope Renaissance! (Part II)
More Info 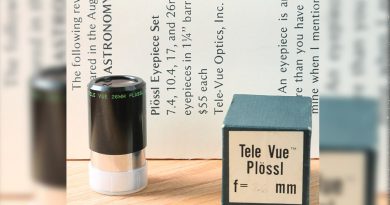 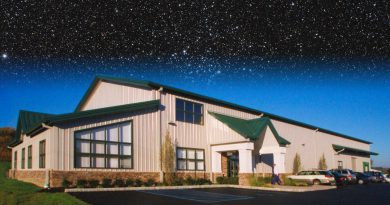 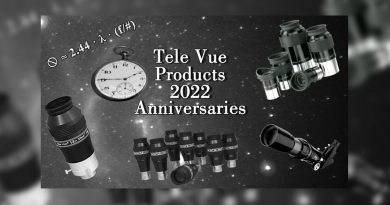