The great lunar eclipse of 8 November 2022 coincided with a lunar occultation of the planet Uranus. The occultation event was visible over a smaller area of the Earth than the eclipse — mostly from the northern part of the western Pacific to the Arctic regions. These events brought out scores of amateur astronomers to record what they saw with their Tele Vue equipment.

As evident by the images we’ve been seeing, Japan was a great location for capturing the lunar eclipse and Uranus occultation that evening. One of the best images of Uranus being occulted by the eclipsed Moon is a sketch made by Twitter user mitu from Japan. Reproduced below, the drawing shows the moment before the green planet is hidden by the Moon. A Tele Vue-85 APO refractor was used at 60x to draw the scene.

Instagram user Deep Sky Dan, from Nagano, Japan, also captured the moment before Uranus disappeared behind the Moon. Uranus is the bright star-like object almost touching the lunar disc at the bottom of the photo. The image was made through a catadioptric scope with a Tele Vue 32mm Plossl eyepiece installed. A phone holder on the eyepiece allowed the image to be made with a Galaxy S10+ smartphone.

Dan also made a time-lapse video from totality to the end of the event (with the same gear) that you can see below.

To get an enlarged image of Uranus on the eclipsed lunar limb, Twitter user RikenTenmon (all rights reserved), in Toyko, added a Tele Vue 2.5x Powermate to a Mak scope to produce the dramatic photo below of Uranus about to be occulted by the lunar limb.

A video of the Uranus Eclipse was made and posted by Twitter user @ONIONI_abc (all rights reserved). This video was taken with Tele Vue 5x Powermate amplifying a Sky 90 APO refractor. The camera for the video was a SONY α7 IV in Full HD. Imaging was done from Chiba, Japan.

On the other side of the world, while the Uranus occultation was not visible, the lunar eclipse was still a big draw for imagers. Jim Johnson in Ashton, MD captured this sharp image of totality with a Tele Vue-NP101is APO refractor using a Tele Vue 2x Powermate amplifier and Canon DSLR camera.

Marc Fitkin, in Ontario, used a Tele Vue-76 APO refractor and Tele Vue 17.3mm Delos eyepiece to create this photo with a smartphone. 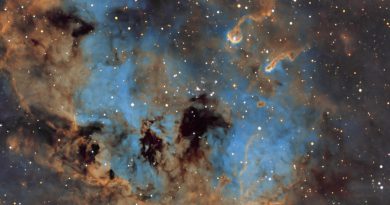