Skip to content
Shows
June 22, 2018October 30, 2018 TVO Staff 2018, CSSP
Tele Vue’s crew at the Cherry Springs Star Party (CSSP) event included Al Nagler, Jon Betancourt, and Paul Dellechiaie along with Alvaro Martinez from AstronSCIENTIFIC.
Night Vision Experience
We had a great time sweeping the night vision monocular around the sky — without a telescope. Nebulae and clusters popped out of the sky. When put in a scope, the Night Vision monocular made the Milky Way dense with stars — like it was a giant globular cluster.
Bandmate Type 2 Filters
Tele Vue’s Jon took advantage of the good seeing to try the new Tele Vue Bandmate Type 2 Nebustar filter on M57 (Ring Nebula) with the Tele Vue NP101is scope. The filter defined the “ring” structure so well that “it looked like someone had punched a hole in it”.
He then turned this nebula filter on Jupiter just to see what the filter would do. While the overall appearance of the planet was an unnatural greenish-blue, he was astonished to see the Great Red Spot “floating” above the  cloud deck! The nebula filter also strengthened some of the cloud bands and made zones darker.
Paul Dellechiaie’s  Astronomik / Tele Vue Bandmate Type2 OIII Filter Observations

I got to observe at CSSP with both the 2” and 1.25” versions of the filter.  I was observing with my 8” f/6 Teeter STS using mostly the 21 and 13 Ethos eyepieces. I did haul out shorter focal length Ethos eyepieces to confirm small details.  This was on the Friday night of the star party.

The two objects I spent the most time looking at were a couple of old favorites, M-27 (usually called the Dumbbell Nebula, though it always looked more like an apple core to me) and the Veil, or Bridal Veil, nebula NGC-6960, 6992, 6995, and a couple of other NGC and various IC numbers.  I also did some random ‘sweeping’ of the southern Milky Way (Ophiuchus through Sagittarius).  In short order, these filters have become my ‘go-to’ for observing, and in some cases such as with fainter objects nebulae that emit at the OIII wavelength, even finding.

Narrowband filters can clarify the image both by eliminating most of the competing light in the sky and also by knocking out other emissions by the object itself.  I have a friend who has equipped binoculars with an OIII filter over one objective and a Hydrogen-beta (Hβ) over the other — there were a couple of objects where the OIII (mostly 500.69nm) and Hβ (486.14nm) emissions were differently distributed, which gave an interesting visual effect.

The Bandmate really demonstrated what it could do on the Western Veil (Broomstick).  With the 2” version on the 21mm Ethos, the filamentary structure was decidedly more discernible than without it. On the eastern part, which mostly has lower surface brightness, the filter made the difference between seeing big parts of that delicate filamentary structure rather than seeing it as a mottled glow.

ROTARION with Tele Vue Eyepieces
Alvaro Martinez from AstronSCIENTIFIC was Tele Vue’s guest at the Star Party. He demoed his ROTARION eyepiece wheel — chock-full of Tele Vue eyepieces.  He also used the Photo Accessory to demonstrate how a DSLR camera body and the Night Vision monocular could be setup for use with various eyepieces rotating into place and auto-focusing at the touch of a button.
Alvaro Martinez’s Comments

This was my first dark-sky star party and I had a wonderful time meeting people and gazing at the night sky. It was great to meet all the amateurs and I appreciated the comments on my ROTARION eyepiece wheel.

Thursday was spectacularly clear. A young couple located near our set-up at Jon’s tent had come from Long Island and spent Thursday at CSSP before going on to a wedding in western Pennsylvania. Why CCSP? Because they had never had a good view of the Milky Way before 😛 . Naturally I could not resist giving a sky tour of the Double Cluster, double stars, and through the Night Vision set-up on our NP101is the spectacular views in Cygnus: North American and Pelican nebulae in one view, the Crescent nebula, Veil Nebula (all three sections in view), and nebulae in the region around Gamma Cygni in the middle of the cross. I used our 55mm Plössl in the Night Vision set-up, giving about 10x and 4° field. We also had a lovely view of Jupiter of course.

On Friday evening, I wandered around with the 55mm Plössl / Night Vision set-up showing many of the same objects through someone’s 90mm refractor and 22” (I think) Dob resulting in more “wows” than I’ve ever heard in an evening. But the highlight was the most spectacular deep-sky view I think I ever saw: The Swan nebula (M17) in Kevin Frederick’s 36” Dob just blazed away with so much detail and contrast, I had trouble recognizing the Swan shape. I corralled a bunch of fellow crazies to show them the view and heard more “holy $%&#” epithets than I ever imagined. And, nearby was the wonderful “Pillars of Creation” in the Eagle nebula. I think Paul Dellechiaie agreed with me on the Swan’s impact.

Using scopes from our NP101is to Kevin’s 36” Dob, I can now concur with Dennis di Cicco’s comment in his Sky & Telescope review of our Night Vision system: “The versatility of this new light-amplifying observing system just might make it a game-changer in the world of amateur astronomy.”

Saturday was marked by gauzy clouds that persisted into the night — making it an evening for the Moon and bright planets only. Many people left before evening due to the conditions. By Sunday afternoon only a few stragglers were left.
More Info 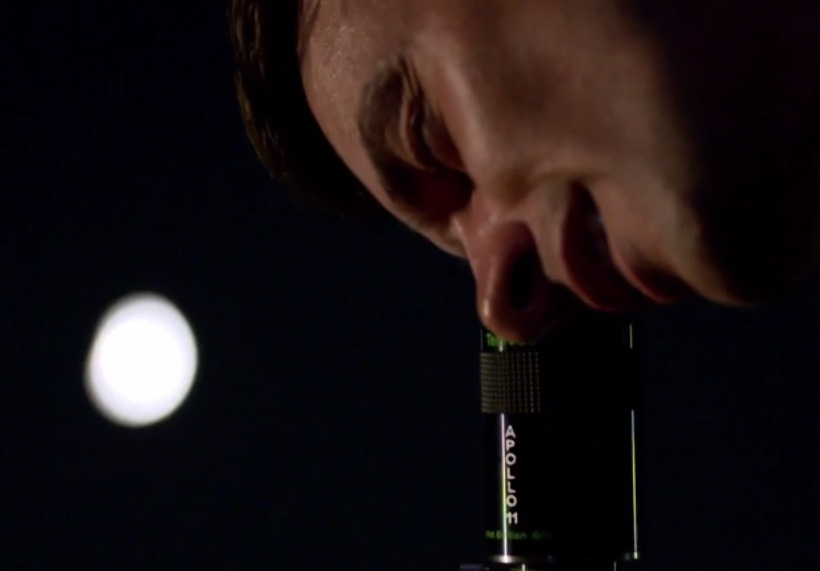 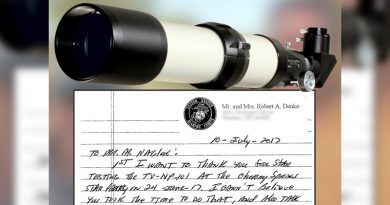 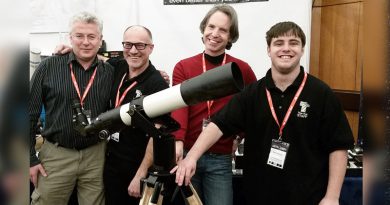 Tele Vue at AstroFest in London!