Has it really been a year already?  A year since people from all-over converged on a 70-mile-wide ribbon of land, that spanned the continental United States, coast-to-coast , to gaze in awe at the Great American Eclipse. This was the first total solar eclipse to land in the contiguous United States since 1979 and the first coast-to-coast one since 1918. So, for many people, this was their first.
From the Pacific coast of Oregon in the Northwest, the path of totality swept down through the prairies of Kansas and Nebraska, toward the Midwest, leaving the southern tip of Illinois, passing through the Southeastern states of Kentucky and Tennessee, before exiting on the Atlantic beaches of South Carolina. Along that path our employees and friends reported through our blog what they saw. Here’s a recap of what they saw.

Stephen Pizzo Inside the NASA Solar Lab in Carbondale, IL

Pre-eclipse, we blogged about our correspondence with Stephen Pizzo. He was preparing to run the NASA Solar Lab: a portable solar observatory  designed to broadcast the eclipse in Hydrogen-α, Calcium k-line, and white light. A RED Dragon Epic monochrome 18-megapixel cinema camera was attached to each scope. These would record at 80-frames-per-second with a dynamic range of whopping 24-stops to produce the “highest resolution still and time imagery of a solar eclipse.” Stephen used 2x and 4x Powermates™ on the scopes to extend their effective focal length  to 3,600mm or 6,400mm for breathtaking, close-up images of the activity on the Sun’s chromosphere.
The Solar Lab’s broadcast took place at Southern Illinois University in Carbondale, IL. You can read our Inside the SOLAR LAB blog post from August 9, 2017.
The Pedaling Astronomer, Nashville, TN
Gary Parkerson, the Pedaling Astronomer (and Astronomy Technology Today magazine editor), wowed the crowds on eclipse day in Nashville, TN by showing them the view  on his smartphone through a Tele Vue TV-60 with FoneMate™ adapter.

@TeleVue caught this on the news today #televue pic.twitter.com/4ADALXtDtT

His appearance at the eclipse included live updates on the Weather Channel. He was also covered by local news stations in the area.
Dr. Bruns Verifies Einstein in Casper, WY
While most of our friends were conducting casual observations, one was conducting a dead-serious experiment:  Dr. Don Bruns, at the Astronomical League convention in Casper, Wyoming, attempted to measure star-position deflection near the sun with our Tele Vue-NP101is telescope. His goal was not just to duplicate the famous 1919 experiment that proved Einstein’s General Theory of Relativity, but to achieve the best results ever using readily available amateur astronomy equipment. For his ground-breaking efforts, Dr. Bruns received the American Astronomical Society’s Chambliss Amateur Achievement Award in 2018.
He appeared this spring as as speaker at the Northeast Astronomy Forum (NEAF) to present his results and spend some time answering questions in our Tele Vue booth at the show.
Read about Dr. Bruns’ breakthrough citizen science experiment on our  May 4, 2018 blog post: Dr. Bruns at NEAF 2018.
Totality in Tellico Plains, TN
Our webmaster and social media scribe traveled 14-hours by car to witness the eclipse in Tennessee. After deciding not to drive further-on to Nashville,  he wound-up in a field in the farming community of Tellico Plains — with a great view of the foothills of the Smoky Mountains.
Equipped with a Tele Vue TV-85 APO refractor, with TRF-2008 0.8x Reducer / Flatnner, he proceeded to photograph totality and all the phases with a SONY A7 II mirrorless interchangeable lens camera. He describes the advent of totality in the following paragraph.
In the final partial phases, before totality, the light turned sunset-yellow and the breeze died. While the quality of the light had a familiar twilight-feel, it came from high in the sky and without any accompanying long-shadows. The other-worldly lighting added to the anticipation of the event.  In the final seconds before totality, the sky dimmed rapidly and the crowd started screaming as we were engulfed in a deep twilight.
You can read more about his experiences in our August 30, 2017 blog post: Totality in Tellico Plains, TN.
Al and Judi Nagler with Friends in Columbia, SC
At the Hilton Embassy in Columbia, SC, Tele Vue co-founders Al and Judi Nagler met up with friends (some they just met) to gaze at the eclipse through Al’s Tele Vue TV-NP101 equipped with FoneMate™ smartphone adapter. A crowd quickly forms to view the eclipse on the smartphone screen.
Al Nagler said of the eclipse:
Seeing the gorgeous flaring corona around an absolutely black solar disc, with lovely pink prominences peeking around the edges, AND Regulus sparkling near the edge of the 100° (Apparent Field of View) eyepiece field, was indeed visual magic.
Al and Judi  also had time to tour the telescope exhibit at the South Carolina State Museum and meet Apollo 16 Lunar Module Pilot Charles Duke — all in one trip!
Read Al’s September 6, 2017 View of a Lifetime! blog post.
Naglers in Nashville, TN
Tennessee was a hotspot for eclipse viewers living in the eastern half of the US. David and Sandy Nagler (President and Vice-President of Tele Vue) and friends gathered at a time-share apartment in the area to witness the event. Says David:
If ever there was an event that bound together every living thing on this planet, the disappearance of the Sun during broad daylight reminds us of just how reliant, fragile and connected we are. To be able to share the emotions of that special moment with others reminds us that all the moments we share are special.
The time before totality was spent on solar viewing.

With a tent setup in the parking lot, and plenty of food, drink, and telescopes setup, an extended crowd materialized around them. But as eclipse-time drew nearer: so did the clouds! 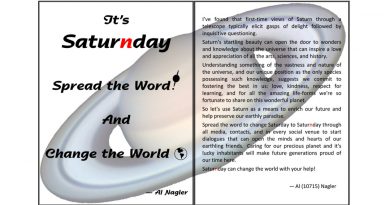 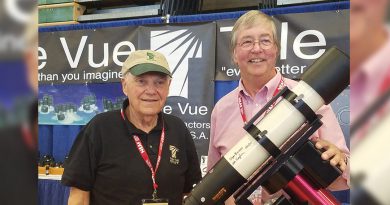