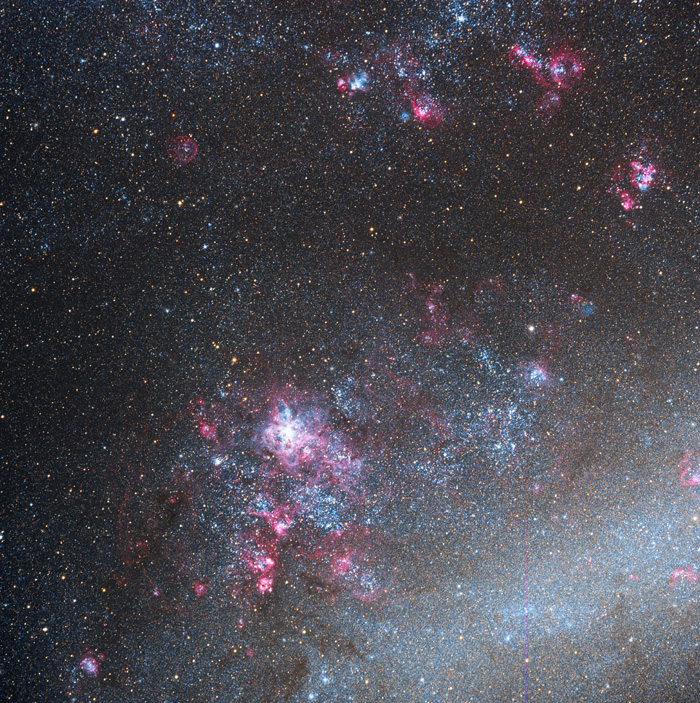 Our blog often profiles an imager employing one of our scopes.  But this week we have a twist: we profile a single Tele Vue scope used by many imagers!  It all began when we started spotting deep space images, posted on-line, created with our  Tele Vue-NP127fli  dedicated astrograph. All the images were made from Australia by different people. It turns out this scope is part of iTelescope.net’s collection of robotic scopes at Siding Spring Observatory. Labeled as the “T9” scope, it does wide-field imaging with the FLI ProLine PL16803 (52mm diagonal CCD) camera.

The LMC is a satellite galaxy of our Milky Way, about 160,000-light years away, and visible from southern latitudes. A large part of it consists of the Tarantula Nebula (also cataloged as 30 Doradus), whose glowing red gas is visible in the lower part of the above image. (Part of the star-filled central bar of the LMC is visible at the bottom-right). The Tarantula is a large cloud of hydrogen gas and dust where star formation continues to take place. In fact, the rate of star formation is the highest of any region in our Local Group of galaxies. The new stars in the Tarantula emit ultra-violet photons that energizes the hydrogen to glow red.

Jarrett Trezzo, the imager behind this image, tells us the following about his experience with the Tele Vue-NP127fli.

I really like the NP line of scopes for their excellent color correction and pinpoint stars — as well as the ability to cover a large camera sensor with almost no vignetting and nice star shape throughout.

Jarrett informs us he bought a Tele Vue-NP101is as a personal scope and his first-light image on AstroBin of NGC 6820 & NGC 6823 in Vulpecula has been posted today!

Above, the Orion (M42 or NGC 1976) on the right and the Running Man (Sh2-279) on the left are beautifully captured by Stacey Willams. By all means, click on the above image to experience  the wispy details, halos of nebulosity around the stars, and dark lanes in the full-size image.

M42 is the closest “stellar nursery” to our planet. The red color in the image is from ionized hydrogen that has been excited by giant stars that are being born in the nebula. The wisps and folds are shaped by stellar winds that form shock waves in the nebula’s gas clouds.

The outline of a shadowy “Running Man” is seen in the nebulosity to the left of M42. This is a smaller region of star formation where the red glow of Hydrogen gas mixes with blue light reflected from the dust grains.

Stacey discusses below how this image came about.

While researching telescopes online I came across a remote observatory (iTelescope.net) which, after signing up, enabled me full online remote access to a range of different imaging telescopes directly from my own computer. After reading through the specifications of the telescopes available through this service, I decided that the Tele Vue NP127fli refractor with FLI Proline 16803 CCD at Siding Springs Observatory offered the field of view needed to capture the image of Orion that I had envisaged. After taking a few images what really struck me with this telescope was the amazing contrast and sharp detail which I feel really makes the Nebula “stand out” against the dark background. The fast focal ratio also allowed to me to capture quite a lot of detail with relatively short exposure times.

When comet 46P/Wirtanen graced our skies at the end of 2018, the glowing green comet was a popular target for imagers. The greenish glow was caused by ionized cyanogen and diatomic carbon from water and volatile compounds that were broken apart and ionized by the Sun’s ultraviolet light. Thomas Zwach used the Siding Springs scope to capture the above image which was also featured on spaceweather.com’s Realtime Image Gallery along with others he took during the apparition of the comet.

The Tele Vue-NP127fli is a 127mm / 5-inch, f/5.3, APO (Nagler-Petzval) astrograph with an optical arrangement of 5-elements in 3-groups. Its sole purpose is to create a versatile “plug & play” imaging system when paired with equipment from Finger Lakes Instrumentation (FLI) —  From the wide field Proline 16803 camera (4.3-degree field on the 52mm diameter image circle) to the high resolution Microline 694 (4.54 micron pixels).
The NP127fli is specifically designed so when the FLI Atlas focuser is at the center of its focus travel, the combined path-length of FLI focuser, filter-wheel and camera puts the CCD sensor at the focal plane of the telescope’s optics. In order to achieve this, the NP127fli’s “Large Field Corrector” lens (visible in the photo) physically sits inside the Atlas. The benefits of the Atlas over a typical manual rack & pinion focuser are: 85 nm/step size, ability to handle 25-lbs of equipment, and FLI’s Zero Tilt Adapter system.

Here’s a recent tweet with images of the open cluster NGC 3532 made with the NP127fli: NGC 3532 is a star cluster also known as the “Firefly,” “Wishing Well,” “Football,” — or simply as Caldwell 91. Whatever you call it, this open cluster of stars in the constellation Carina is most easily visible from the southern hemisphere. Newer stars in the cluster glow blue while older ones have become red giants — giving the cluster a mix of star hues. It was also the first target of observation by the Hubble Space Telescope in 1990. The wide span of this cluster is a perfect match for the NP127fli astrograph.