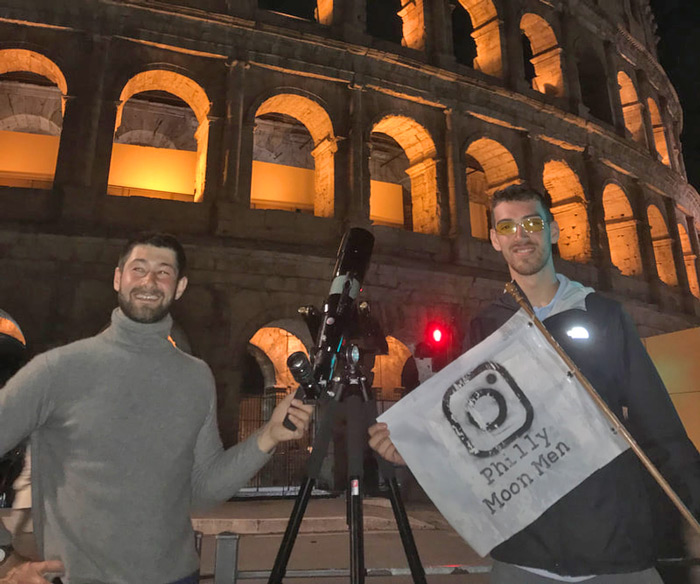 We got a call into the office a while back from the “Philly Moon Men.” The caller identified himself as one of “Moon Men.” He told us of their astronomy outreach project in the city of Philadelphia and would we like to be part of it in any way? Al has been a sidewalk astronomer since a teenager and David was more than happy to listen to their ideas and help guide them towards their goal.  They’ve setup scopes on street corners and vacant lots in the inner-city to show people that they live in a Universe. Because every human being that has ever lived has looked at the same Moon, all humanity is connected by the sight of this celestial object.

We were intrigued by their youthful enthusiasm and dedication to using telescopes as a means of bridging socioeconomic gaps.  We invited them to meet us at the Northeast Astronomy Forum at the beginning of April to make connections with other outreach groups and see how other ideas meshed with their own. Two smartly dressed Moon Men showed up and told us more about their adventure with astronomy and how the NEAF experience was invaluable to furthering their understanding of what’s going on in the outreach community.  Frankly, they were quite surprised at how much was already going on!

Philly Moon Men Mission Statement
The Philly Moon Men bring astronomy to places where people are not able to escape light pollution. That means setting up high-powered telescopes on crowded street corners for everyone to use. You can find us, impeccably dressed, on the corner of 4th and South whenever the Moon is out!

The Moon Men are Bill Green and Brendan Happe. “In a light polluted city, there aren’t many chances to pause and reflect on the fact that we all live on the same planet Earth, sharing the same atmosphere, floating around in a vast and beautiful cosmos,” they write on their gofundme page.

They’ve even lent out telescopes they’ve collected to interested beginners that they try to pair with astronomy mentors.

Their long-range plan is to have trained community leaders set up telescopes in local neighborhoods on the theory that telescopes create safe public spaces for neighbors to gather.

The Philly Moon Men are supportive of their community in other ways. They’ve raised over $1,000 for HIV and AIDS services in Philadelphia for their local nonprofit, Philly AIDS Thrift.

The Moon Men aren’t limited to just doing outreach in the “city of brotherly love.” Right this minute they are touring Europe on bikes with a Tele Vue-76 telescope! They are setting up the scope in city centers on a winding, three month, 2,000-mile journey from Rome to Copenhagen. Bill wrote on the Philly Men Blog: “This journey will be a testament to how the night sky unites us all. We will set up telescopes in public places to reconnect light polluted cities to the night sky. Along the way, we will visit places that are important to the history of astronomy, and take a look at some truly ancient telescopes!”

Please, do this for the people!

So far in Rome, they’ve experienced cycling through Italian traffic, dazzling people with telescopic views of the heavens from the Spanish Steps and Colosseum, and Bill emailed us this interesting encounter: “In Piazza di Santa Maria, an armed guard approached us. With an assault rifle hanging from his neck, we thought for sure he was going to tell us to leave. Instead, he asked to look at the moon! He thanked us for the view, smiled, and said: Please, do this for the people!“ Between their two bicycles, the Moon Men are carrying:

All this weighs just 20-lbs!

Bill wrote us the following report about the gear just a week into their trip:

I couldn’t imagine any other scope being up to this type of challenge.

This compact refractor impresses us with every view. It easily unpacks in less than three minutes, even in a crowded piazza. It is well balanced and easy to aim. The wide fields of the Nagler eyepieces mean that, even at high magnification, we can spend more time engaging the public and less time pointing the telescope. As an optical engineer myself, the build quality is some of the highest I have found in an instrument of any kind. Even an untrained eye can tell the difference. People stay longer and ask more questions. They take their time to look again. Our FoneMate makes it easy for us to take pictures, and we send people home with a memory of what the Universe looks like. On gravel roads and cobblestone, this telescope is not getting an easy ride. Each night I check the collimation, and it is rock solid. I couldn’t imagine any other scope being up to this type of challenge.

This trip won’t cast a cloud on their outreach in Philly this summer. They have arranged for volunteer “Moon People” to set up telescopes in the city in their absence.  They are also forming plans with the local school system and police to get kids excited about space and especially the Moon!

Do you have a telescope that you don’t use so often anymore? We would love to adopt it, and give it a home in Philadelphia’s public spaces.

(If you don’t have an old telescope, consider donating on their  gofundme page.)

We’re happy to help the Philly Moon Men volunteer organization further their goal to use astronomy as a uniting force in the world.  If you have a chance to meet Bill and Brendan along their tour in Europe or on the streets of Philadelphia, we’re sure you’ll enjoy their enthusiasm for sharing the night sky with those that don’t normally look up.
The Moon Men operate with he same spirit as the original sidewalk astronomer: San Francisco’s John Dobson. They asked us to include a quote from him in this blog:

I’d like there to be enough telescopes so that the people of Earth have a chance to see what the universe looks like. It doesn’t look anything like San Francisco on a sunny day, it’s made out of hydrogen and helium, it’s very dark. But people do not understand this unless they look through a telescope. The amateurs must solve the problem of making it possible for the public to have a look… I simply mean people who are willing to get their telescopes out… but you have to get it to a place where the public goes. You see the importance of a telescope is not on how big it is… it is is how many people less fortunate than you got to look through it.John Dobson (1915 – 2014)

Tele Vue and the Pedaling Astronomer Project
Cycling with our compact scopes is a recurring theme for Tele Vue. The brainchild of Astronomy Technology Today magazine editor Gary Parkerson, the Pedaling Astronomer Project had Gary bicycling through the lower 48 states to share telescope views with the public. This epic journey required a light-weight scope to pack along and our Tele Vue TV-60 was a natural choice.  Probably the single most “public” event on his epic journey had to be the 2017 Great American Eclipse.
His trip was covered by the Weather Channel and local news stations.
Have Ranger, Will Travel!
Our 1996 advertisement for the then new Tele Vue Ranger had a whimsical image of a Ranger looking attached to the top-tube of a road bike as if it were a tire pump. Could this have been the inspiration for all the pedaling astronomers we’ve run into since?
May Moon Notes
Seasonal Blue Moon: the full Moon on May 18th will be the third full Moon in a season with four full Moons. This Week in Apollo History
Apollo 10, launched May 18, 1969, brought a Lunar Module into lunar orbit for the first time. Named Snoopy, it took a two astronaut crew within miles of the lunar surface in a dress rehearsal for lunar landing.
More Info