This week’s guest blog post is written by Gavin Orpin. The blog came about as a result of a discussion between Gavin and Tele Vue President David Nagler at the recent AstroFest 2019 show held at the Kensington Conference and Events Centre in London. [Night Vision] has given me a
completely new aspect of the
hobby to explore.

Given the significant light pollution, living near central London does create some big issues for visual astronomy. However, night vision has given me the ability to observe DSOs (Deep Sky Objects) with my Tele Vue-85 APO telescope that I would have no chance with normal glass eyepieces. It has given me a completely new aspect of the hobby to explore — for that I am very grateful to my astro club friend and Tele Vue for making it possible for a U.K. based astronomer. In addition, when I do get the chance to visit a dark site, the night vision works even better and I can see things I never dreamed of when I began observing the stars.

I confess initially I was quite skeptical, the green display in particular putting me off. The breakthrough for me came one evening at a club dark sky trip. I had my first look with night vision and was very impressed, despite the green. This was in August 2017 and broadly coincided with Tele Vue and Tactical Night Vision Company (TNVC) launching the night vision adapters for Tele Vue eyepieces and Tele Vue FoneMate smartphone adapter. I did some research and eventually found a European manufacturer of “PVS-14s” (a night vision monocular that uses Generation 3 image intensifiers) which could legally sell them to U.K. residents and which also came with new good quality white phosphor Photonis 4g intensifier tubes. So, I took the plunge and ordered one. I contacted TNVC to order the adapter which can be shipped to the U.K.. Also, despite being a visual only astronomer, I ordered the Tele Vue FoneMate adapter and FoneMate from TNVC.

AN/PVS-14 — What’s in a Name?
Back in World War II, the US military invented a system of  naming electronic and communications gear. After the war, this system was formalized as MIL-STD-196 (aka: “Military Standard 196”).
Under MIL-STD-196, equipment names start with “AN” (originally for “Army/Navy”) followed by a slash.  Next are three letters that have a specific meaning depending on what position they occupy. For instance, a leading “P” always means “Portable”, a “V” in the second position always means “Visual”, and a final “S” means “Search” using “Detecting or Range and Bearing”.  Therefore, any hardware designated AN/PVS is a type of portable military gear for visual searching.
The final requirement under MIL-STD-196 is a model number to uniquely identify the product. In our example, “14” indicates a particular form-factor of night vision monocular with a Generation 3 image intensifier. Likewise the similarly named AN/PVS-7  accomplishes the same goal as the AN/PVS-14 but differs in that the “7” indicates Generation 3 night vision goggles instead of a monocular.
Export of U.S. Night Vision Devices are restricted by the U.S. State Department’s International Traffic in Arms Regulation (ITAR). But manufacturers outside the U.S. have adopted the “PVS-14″ name for their comparable products.
The MIL-STD-196 has evolved over time. For instance, a “B” as the second letter no longer stands for “Pigeon.”  While pigeons are not “electronic” they were considered “communications” gear.  The US Army retired its last homing pigeon in 1957.

I was immediately hooked on
night vision astronomy.

By the end of November 2017, I had gathered all the equipment (including 6nm Hα filter for nebulae and 685nm infrared long pass filter for galaxies and clusters) necessary to begin night vision astronomy. On my first night I saw the Horsehead and Flame nebulae for the first time ever (and this was from the light polluted back garden near London!) It was transformational for me and I was immediately hooked on night vision astronomy. As well as the stunning visual views, I also loved the FoneMate phone camera images that I could take as a memento of observing sessions. I’ve never imagined this before and now had a completely new facet of the hobby for me to explore.

“Owl Eyes” for Astronomy
The combination of night vision monocular and Tele Vue designed accessories can be used on any scope to create an “aperture amplifier”: allowing small scopes to see objects that normally would need a DOB and allowing big DOBs to see further. We recommend monoculars with “white phosphor” sensors for the most natural views. Night vision accessories for attachment to Tele Vue eyepieces are now available for sale exclusively at TNVC.com. They also have packages that include  FoneMate™ for imaging on your smartphone.

Since then, I have gradually gained experience and refined my night vision setup. In September 2018 I had a holiday trip to Tenerife (Canary Islands) and decided to take my astro gear with me. This included the Tele Vue-85, which is a great travel telescope, that I can take as carry-on luggage.

Since Tenerife was much further south than the U.K., it opened up new skies for me to see which was exciting. I had some decent night skies, although not as dark as I hoped, since the moon rose shortly after midnight and there was some light pollution around the hotel in the village I was staying in.

Nonetheless, using the Tele Vue-85 and a Tele Vue 55mm Plössl to reduce the speed of the system to around f/3.3, the night vision monocular gave some spectacular visual views of deep sky objects such as the North American, Veil, Eagle, Lagoon and Catspaw nebulae.

I use a Huawei P20 Pro phone to take my images. It allows me to take exposures up to 30 seconds long with low ISO of 50-200 to reduce graininess. Since the main purpose of my images is to record my visual observing sessions, my aim is to try to replicate the actual eyepiece views as much as possible. I am not going for perfect images and don’t do any post-processing. I love the ability to observe lots of objects using a “go-to” tracking mount and also take quick snapshots of them.

Emission nebulae are my favourite DSOs since night vision works best on these (with the Hα filter) but I also have lots of fun observing galaxies and globular clusters with night vision (and the 685nm infrared longpass filter). I recently saw my first supernova using night vision! 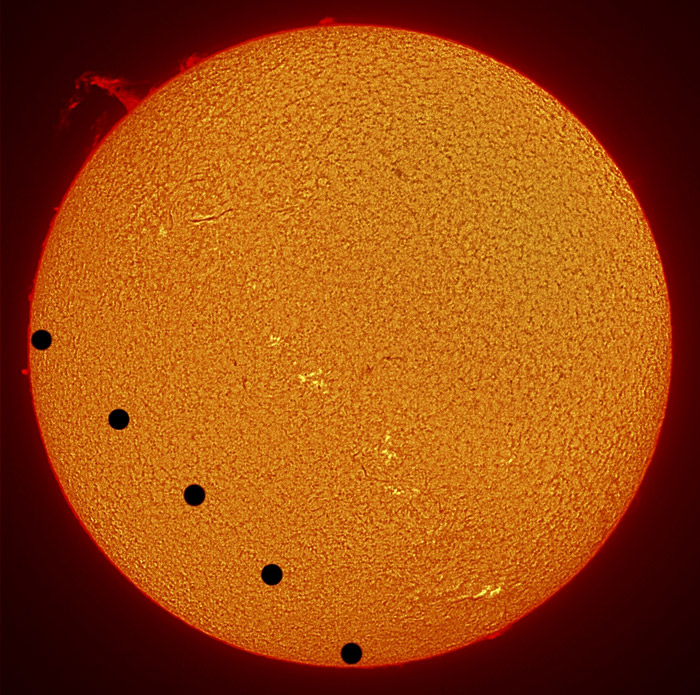 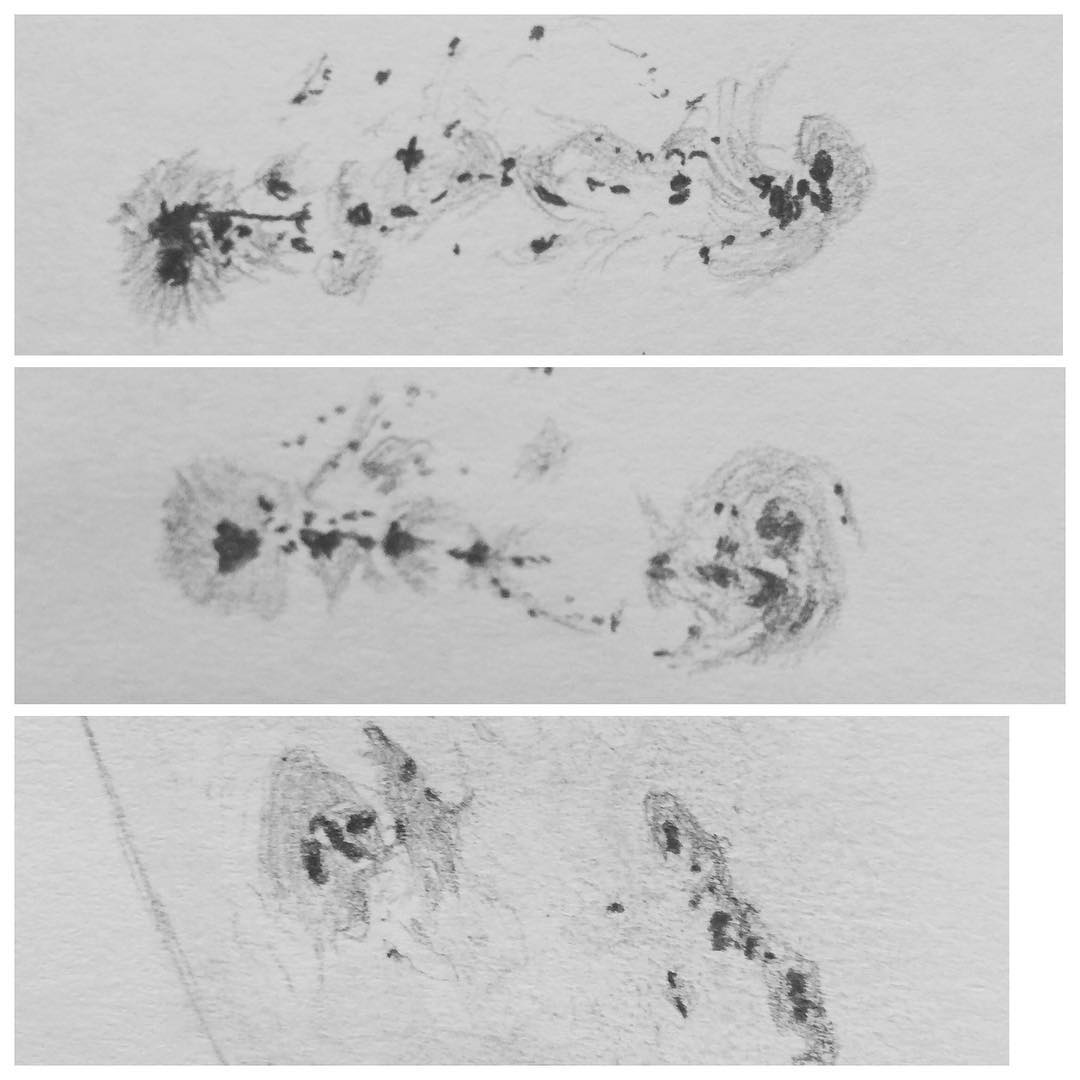 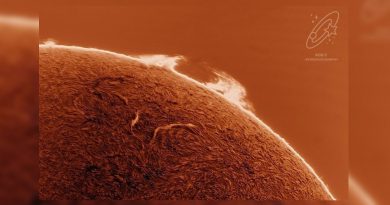