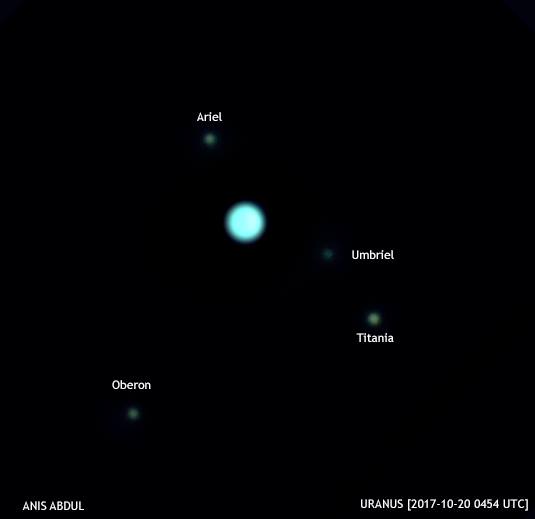 Because of its distance from Earth and near circular orbit (eccentricity of 0.046 vs. 0.21 for Mars ) Uranus will only  fade and shrink by a 1/10 of a decimal point by January 2020 when it hits quadrature (90-degrees from the Sun). You’ll still see the full-face of the planet because the phase is imperceptible from our distance. This makes it a naked-eye target in dark skies and easy to locate in a binocular or finderscope.

It’s star-like appearance allowed Uranus to masquerade as a “fixed star” for most of the history of humanity. Read our 2018 Uranus Opposition blog post to learn how the planet was cataloged many times by astronomers before being identified as a planet.

Did you observe, sketch or image with Tele Vue gear? We’ll like your social media post on that if you tag it #televue and the gear used. Example:
#televue #powermate #ethos #uranus
Uranus Observing / Imaging Advice

Once your telescope has landed on Uranus, you need to confirm its planetary nature by ramping up the power. Our Tele Vue Nagler 6-3-mm Planetary Zoom (mobile site) in medium to long focal length scopes excellent for this task. Just twist the black barrel to zoom-in and be rewarded with the sight of a planetary disk. (No disk visible? Then you landed on a star). As a Planetary Zoom eyepiece it was designed for full field sharpness for any speed telescope, high contrast and transmission for natural color rendition, low scatter, and comfortable eye-relief. Use it to fine-tune magnification for the seeing conditions — no need to swap eyepieces to find the highest usable power.

Powermate™ visual/imaging amplifiers (mobile site) have some advantages over the Barlow. They increase the focal length of your scope with reduced aberrations, greater magnification potential, and compact size compared to typical Barlow lenses. In fact, Powermates™ can be stacked with no adverse impact! Tele Vue Powermates™ are available in 2″ barrels (2x & 4x) and 1¼” barrels (2.5x & 5x).

They can give a short focal length scope the boost needed view objects like Uranus at higher power. You can also place an appropriately sized planetary camera in the eyepiece holder for imaging.  But Powermates™ also have a special feature for imaging: the visual tops all unscrew to accept a specific Tele Vue Powermate™ T-Ring Adapter. This allows for attachment of cameras and T-threaded accessories. Most any commonly available DSLR, astro-camera, and even some industrial cameras will work with Powermates™.