Skip to content
Shows
January 22, 2020May 6, 2022 David Nagler 2020, Apollo, AstroFest, Widescreen Centre
Sandy and I are “chuffed” to again be guests of Tele Vue dealer The Widescreen Centre at the UK’s premier public space and astronomy event: European AstroFest. Frequent attendees of the show know I’ve returned there for many years and it is always a pleasure to get together with Simon, Elena and their staff to answer your questions regarding Tele Vue products.

At the 2019 show I couldn’t say anything about the Apollo 11mm eyepiece project because there was no physical product or prototypes available and nothing had been publicly announced (See: Tele Vue’s Secret Launch: Apollo 11mm Eyepiece! blog post from back in April).  Tele Vue has a strict “no vaporware” policy, so we don’t discuss any project until we actually have it in hand and approved for production.
We released it to dealers only last month, so this is the first AstroFest where you’ll  be able to look through this limited edition eyepiece.  I’ll be happy to discuss with you how my father’s work on the Apollo space program formed the backstory of why Tele Vue has succeeded in this business for four decades. Additionally, The Widescreen Centre will have Apollo 11mm commemorative eyepieces available for purchase. See our Apollo 11mm page on our website (mobile version) for details on this commemorative eyepiece.
We also have a lot of fun at the show. See this video from a few years back:
AstroFest 2020 will be at the Kensington Conference and Events Centre in London and runs from January 31st to February 1st.
More Info 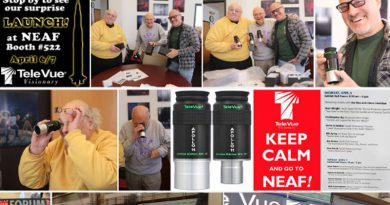 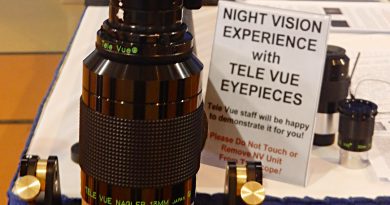 About the NEAF Night Vision Demonstration